This is all working great and real fast!!!

But, sometime, OSM data is wrong,
for example, here, the “Rue Abélard” street is NOT supposed to be one way: 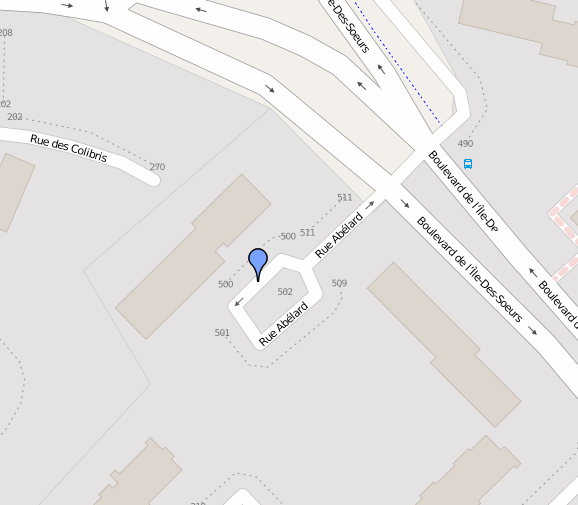 Because of this, DijkstraOneToMany.calcPath() always return path.isFound() == false when routing to this node.

Is there something I can do to workaround this situation ?

I guess I can create a CarFlagEncoder subclass, but I do not know where to start.

I have an issue which I cannot reproduce on graphhopper.com. I have a specific coordinate from which I am unable to get any directions from. The error is always “Connection between locations not found”. Other locations in the area is no problem. It is specifically this location: https://www.openstreetmap.org/node/342523660#map=17/55.86225/9.84607 It tried finding the nearest node via locationindex, but t is a oneway street in the wrong direction: But it is working on graphhopper.com/maps …

After importing the OSM, I did this, and the routing works like a charm!
Bonus: the files on disk are smaller after that too!

yes, exactly. Keep in mind that there are two properties: the undirected and the direction (oneway) property where the oneway is 0 and the undirected is 200 by default currently.

Joking aside, of course this could still make problems, but they are rare then. There are the following different solutions:

We just decided for the ‘simplest’ solution but investigating this problem further could be worth the effort!

I like the idea of having multiple start/end nodes.
I understand the problem of weightning the snapping distance.
But I guess only considering the distance would be ok, since the gap between the query point and the snap point is usually not on a road.

Anyway, for now (for me), I think your ‘simplest’ solution, is enough.
In a normal situation, we do not want ‘forbidden’ edges to be used.
This is just to workaround the fact that some edges are wrongly flagged as oneway in the OSM data.

In my testing, if the OSM data is correct, the Algo is always able to find a path.

Thank you for your time, it is really appreciated!

But I guess only considering the distance would be ok, since the gap between the query point and the snap point is usually not on a road.

This is just to workaround the fact that some edges are wrongly flagged as oneway in the OSM data.

Exactly. And that is also the reason the option is disabled by default. But sometimes, if you deal with trucks, you can easily create such subnetworks unintended even if the data is correct.