I have been working on customizing Graphhopper for the past 6 months or so. My implementations include creating graphs from our own databases, creating custom flag encoders, storing additional properties in edges to be returned in the response of the routing request, creating routing response having routes with multiple weightings(shortest, fastest combined in one response), and other similar tweaks to meet our requirements. All this has been running very smoothly on the server using flexibility mode (because heading and alternative routes were required).

We recently moved to offline routing on android and now the calculation of response takes very long. A benchmark route we’re using is between two points separated by about 1500 km having a lot of alternative routes. The route calculation takes about 140-160 seconds on a phone with a good processor and RAM; which is not good at all. I tried using the recently implemented Hybrid mode (LM) but the speed didn’t improve much. Then I tried enabling CH and the same response comes within 1-2 seconds. However, heading parameter is required and CH mode does not fully have that. So I tried enabling forced CH heading and tried to fix the issues coming in that.

As a workaround, I included an additional step in DijkstraBidirectionRef class right before the condition

is checked. What i did was that I added a function in Path4CH class which gets the nodes of the unfavoured edges from the routing graph, unpacks the shortcuts and checks if any edge in the unpacked shortcut has any of the unfavoured edges’ nodes. If true, I added a large constant to the weight of that specific route hence the condition above gets false and this shortcut route isn’t considered as the best. This solved the heading problem in a number of cases as shown in figures 3 and 4 (at the end of this post).

However, it is still failing in some cases with the same initial problem as shown in figure 5 (at the end of this post).

Also, I pulled the latest code and the updates to the Path class are causing troubles. The returned path in this problematic route has an edge from node 75367 to node 87429 and this snippet of code throws the exception:

I hope i have elaborated enough. I wanted to ask is there any work being done on headings in CH? Or is there anything I’m missing? Thankyou. 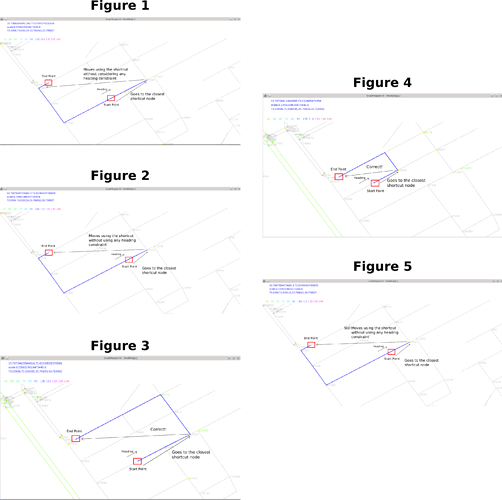 Nice to hear this

I tried using the recently implemented Hybrid mode (LM) but the speed didn’t improve much.

It should be roughly 10 times faster.

So I tried enabling forced CH heading and tried to fix the issues coming in that.

This is not a practical issue. It is a theoretical limitation if you require non-heuristic routes.

Also, I pulled the latest code and the updates to the Path class are causing troubles.

I wanted to ask is there any work being done on headings in CH?

No, we could only provide workarounds that would sometimes fail OR would have to implement a complete new procedure how CH is handled, which is very time consuming.